Not to be missed is a great biking trail leading through Wild Rose, Saxeville and the Springwater Volunteer Covered Bridge.  Capable of being biked by all ages and complete with lots of place to stop and smell the roses; this trail is not to be missed! 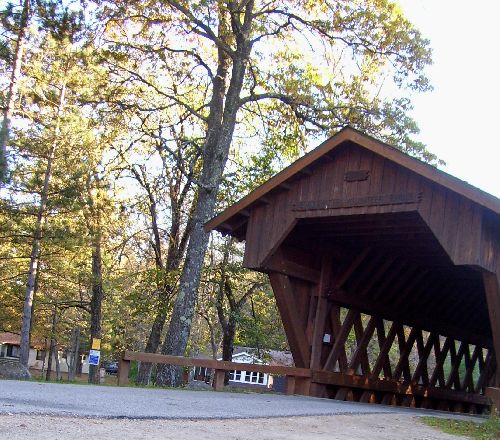 Click on the Boardwalk tab at left for a great nature activity guide for kids when at Roberts Park.

The earliest of the flowers, Skunk Cabbage, is welcoming spring to Robert’s Park. You might wonder how this flower can blossom during cool spring weather. Skunk Cabbage grows so fast that the heat from its cellular respiration melts surrounding snow. This plant is appropriately named because both the flower and leaves have an odor of decay, which attracts flesh flies to pollinate it. Look closely inside to see many tiny yellow flowers. Soon large green cabbage-like leaves - up to 2 feet tall - will cover the low, wet areas. Explore the trails at Robert’s Park to discover more wonders of nature.
(Picture of this skunk cabbage was taken in Robert's Park on March 27, 2010 by Vicki Martin.  Text provided by Sally Martin and Vicki Martin.) 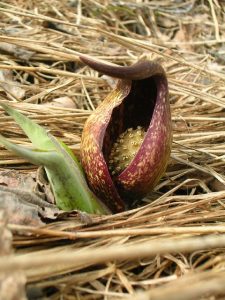 Wisconsin’s most recent large glacier, consisting of six large lobes, flowed into the state about 25,000 years ago. It reached its greatest extent, covering approximately two-thirds of the state (all but the southwestern part), about 14,000 to 16,000 years ago before melting back.

The last Ice Age endured from 2.5 million to 10,000 years ago. It covered most of northern North America, as far south as the Missouri and Ohio River Valleys. The last stage of glaciation is called the “Wisconsin Glaciation” because its effects are more noticeable here than anywhere else in the United States.

A variety of geological landforms, associated almost exclusively with glaciation, are better ...glossary for definitions of these and other Trail-related terms.

A near-by section of the Ice Age Trail featured in "Mammoth Trails."

A map of the Ice Age Trail as it currently runs through Waushara County.

A small parking area is available at the Pearl and George Dopp Park at the north end of Wild Rose adjacent to State HWY 22. The trail head leading to Roberts Park Recreation Area is accessible north of the Wildcats Booster Club sign.

Also located at the Pearl and George Dopp Memorial Park, also known as North Park, is an artesian spring. One of many springs located in various areas along the the headwaters of the Pine River, this spring is channeled through a simple plumbing pipe into the ground and runs continuously every minute of the day year round simply from the pressure of the spring water. Travelers have long stopped here to refill water jugs. Even today, many stop to collect a jug of clear, pure Wild Rose spring water to ease their thirst. 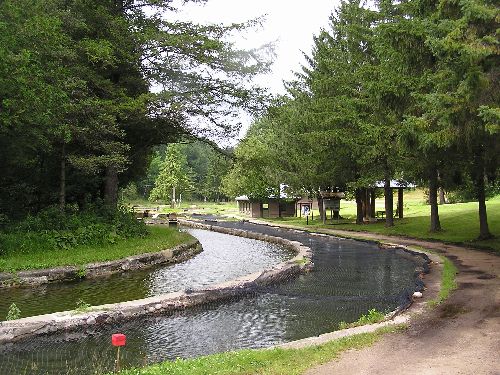